It’s been a while since my last update but things are moving along steadily. The post I announced about character creation is underway but there is still a bit of tweaking to be done (skill descriptions, cross-requirements…). That post will be up soon, but for now I thought I’d give a peak of a GUI I’ve been working on: 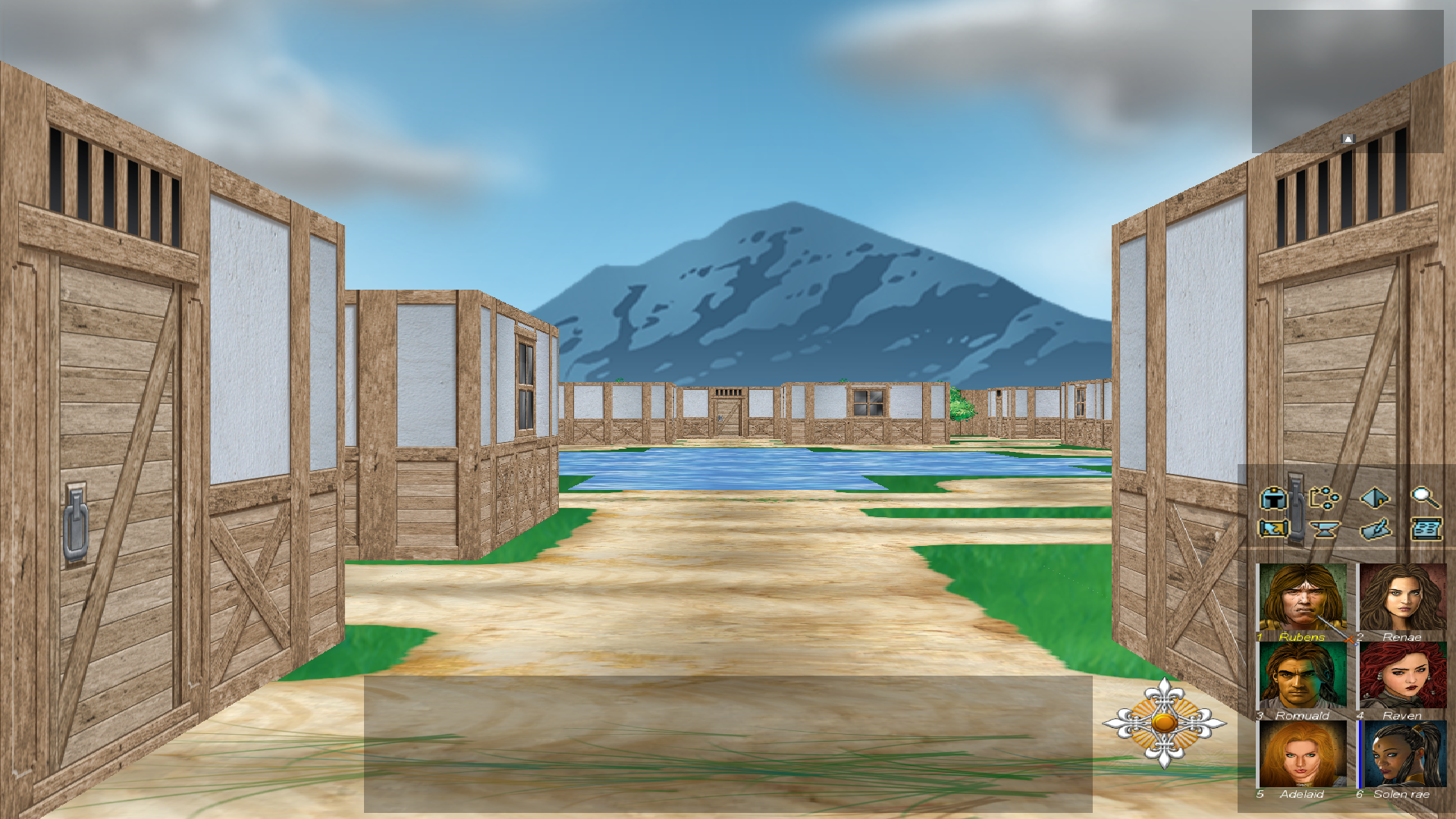 A new take at the Sovereign GUI (Click to enlarge)

This reveals a couple new things:

– Sovereign will be much more intuitive and mouse-friendly than Underworld was. Even if the GUI continues to evolve, this will be a priority.
– Portraits are in! Right now only the human portraits are finished but it is just a matter of weeks before the others roll in.
– A new town environment.

Naturally, all comments and suggestions are welcomed 😉

EDIT – In case you missed it, there was a post revealing the world map a few weeks back! 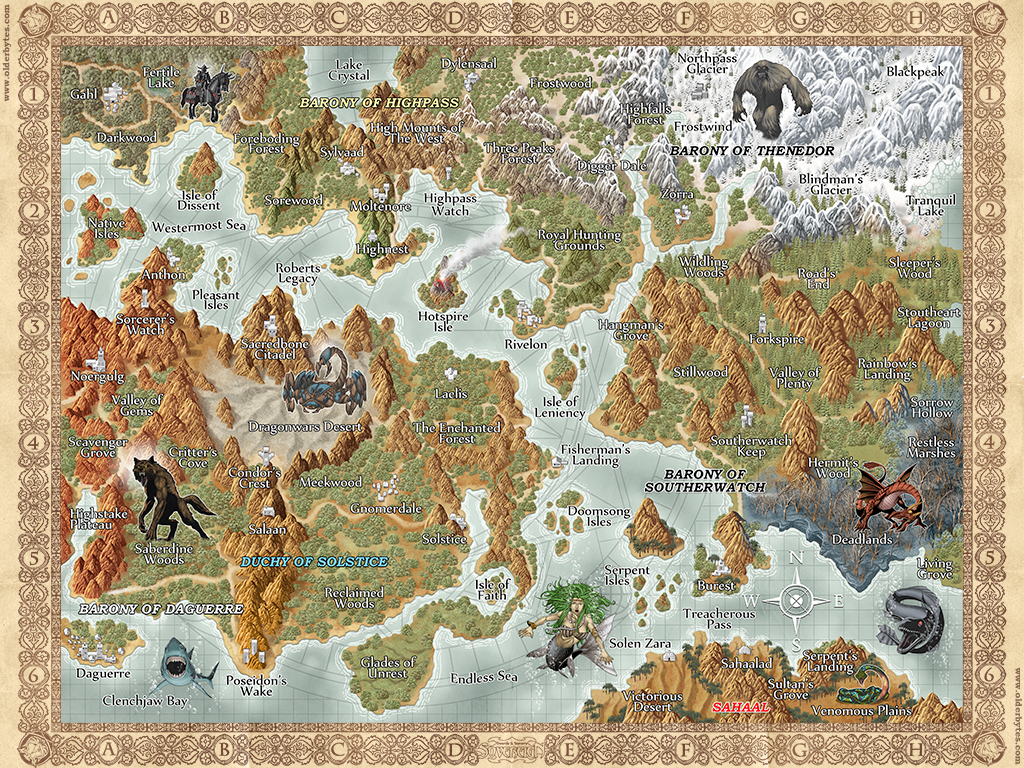 A happy new year to all!

I’ll use this opportunity for a quick catchup on late progress. Sovereign’s new character creation system has made leaps and bounds. The world map is done and is looking very nice.

But I haven’t coded in a few days due to the dangers of coding under the influence (of legal yet mind altering substances).

I was fortunate enough to have customers not only post constructive feedback for updates and fixes, but also encouragements that I find very useful today. With work on Sovereign (mostly pre-production at this stage) progressing daily, I find myself facing a pretty daunting task. Especially considering that I am aiming for a 2013 release. Some might argue it is total madness, while I like to think it is a fun and worthwhile challenge. 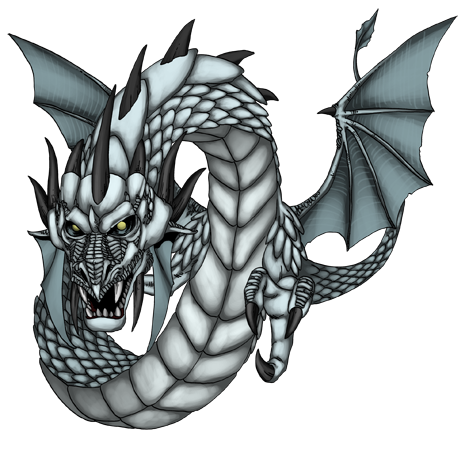 Great party-based combat. I liked how enemies can neutralize certain characters, making a diverse and balanced group most efficient. It has been a team effort to get this far! I’m also impressed with the depth of your dungeons, how the catacombs open up to the underworld and expanding maps. Exploration has been very satisfying.

Just wanted to let you know, I completed the game and you have a very satisfied customer.

Thanks Charles ! .. now you have made me want to track down MM1 and 2 and give them a shot again.

I liked the artwork very much, but how many (non-demonic) pretty girls did my party kill? Several thousand? My heroes will never get a date — they depopulated the kingdom!

Thanks for a great game!

If youre a fan of the Might and Magic series (or any similair game) you´ll feel right at home with S&S: Underworld.

I think you have done a very good job of making puzzles that are challenging, but actually doable without spoilers, and that isn’t easy to do.

I’ve just taken the demo as far as it will go… and what a fantastic demo it was. I haven’t experieced fun and addictive gameplay like this in a long time. I’m kind of new to these old school RPGs, but it’s plain to see that this is a quality game with excellent gameplay mechanics. Can’t wait to continue the adventure. After purchase, will I be able to continue from my save point in the demo, or will I need to start a new game?

Thanks, and congratulations on your thoroughly enjoyable game! (I’m sure glad you posted an announcement for your new sequal on RPGCodex, or I’d have never known of these titles)

“I would just like to say that I am having great fun playing this game. Might and Magic 2 is one of my all time favorites and this brings back great memories. Can’t wait for the 2nd game and keep up the great work. :D”

Started my new party now. These changes are just fantastic! And the added spellpoint bar is just awesome!

I’ve already downloaded the game and currently playing and having a blast.

This is a wonderful classic cRPG romp. Been years since we could do this in a fresh new setting and engine.

And why is it I can’t seem to stop playing this game … vodoo maybe? It seems that when I stop playing I’m still thinking about playing … gotta be vodoo of some type 😉

btw, this game is seriously eating into my Skyrim time. 😉

btw, I’ve posted a link and embedded your video on a few forums I regularly visit.

Thanks for a great game!

I am having a great time with it so far. Only a few hours in, but I really like it. Great Wizardry and M&M feel to it.

I must say that I liked the option to inspect an item and it would show you which class could use the item and damage stats, etc. Also, when I tried to equip a shield while already wielding a 2h weapon, it popped a yellow message up explaining to me that I already had a 2h weapon equipped. I wasn’t expecting that level of feedback.

I already had the game on my mind all evening while watching a movie with my wife and trying to figure out how to get out of it to play a few more turns!

Just finished the demo – totally awesome. Will be buying this!

Very happy with this game. Made me go back and play Might and Magic 2. Then I played M&M6 :). Great work on a fun game and looking forward to your next game.

I had great plans for today to work on my garden, then I read your review. I got hooked and bought the game. Four addictive hours later the garden continues to look as though it is the “before” picture in a fertilizer ad.

I still have not finished this game, myself. I know that the next time I sit down to play, hours will go by, and nothing else will get done that day. I’m glad that others are enjoying it as well.

Agreeing on all points, started playing shortly after you, finished just the other day, very enjoyable. Am trying it again with a different party load, dropping 2 classes that were least useful at the back half of game, makes the front half almost impossible, very fun.

I am really quite excited that a one man indie was able to put this game together. This game is just a tad short of Might and Magic 6 quality. And when the indie shops start putting out games like that, I will be refocusing my whole gaming time.

– Just when you think you have the combat figured out, the enemy will crit one of your PCs and knock him out of the fight. You can’t take combat for granted.
– The little side quests are pretty cool. I figured out the jewel one, can’t get to the pirate one, and am trying to solve the one with the woman who lost her kin.
– Graphics are gorgeous. The stills are fantastic and so are the character and monster portraits. The terrain is also above average.
– Inventory, party creation, combat, setting, and interface all remind me of Might and Magic 1 and 2. This is a good thing. In fact, I can’t help but think of it as a fan-made Might and Magic.
– Monsters are diverse so far and monster parties make sense. None of this annoying habit of monsters that have nothing to do with one another joining against the heroes like in M&M 1 and 2.

I’ll add a review roundup soon. Some good things there as well!

Following up on the not so popular poll (it isn’t too late though ;)) inviting players to weigh in on GUI design decisions, as well as a lengthier discussion on this subject on RPGCodex, here is the current state of affairs concerning the traditional version of the GUI. 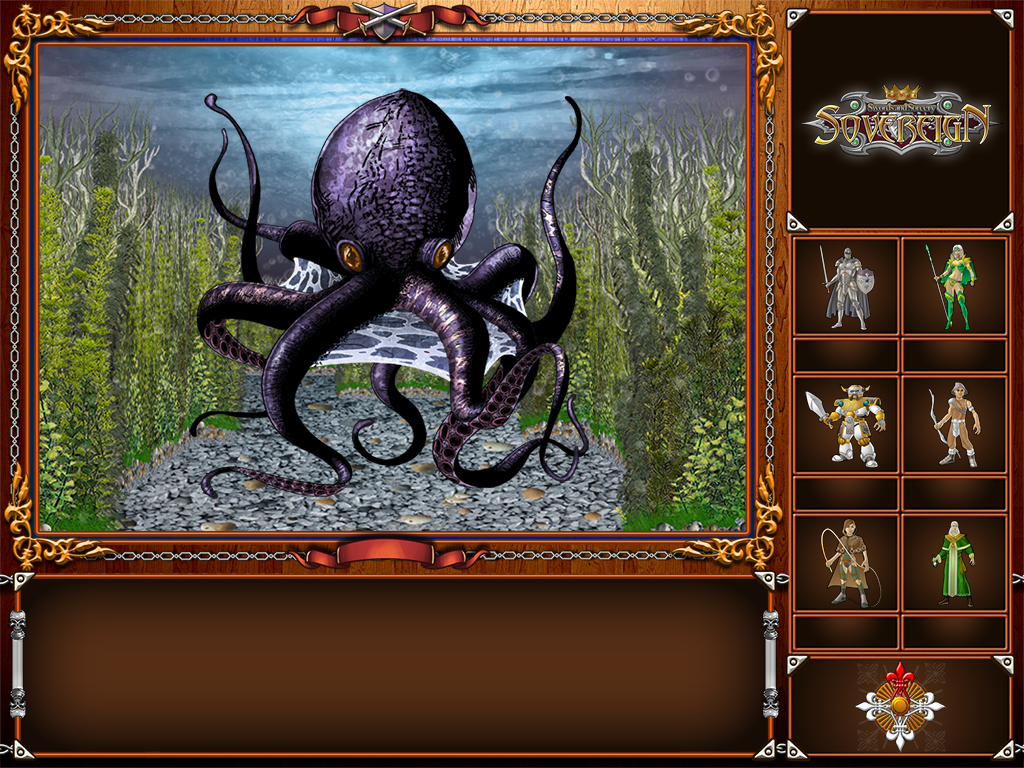