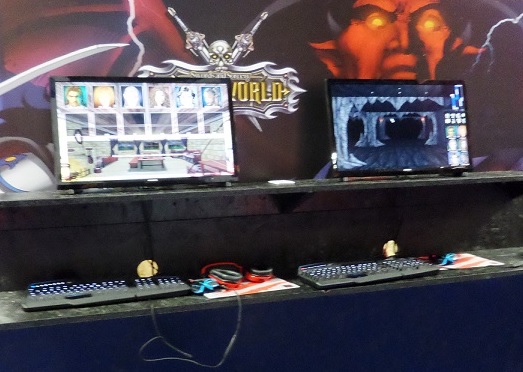 I noticed a sharp decrease in RSS readership just recently. Of course I am entirely to blame for this, and the title of this post probably explains it for the most part. Add to that a less than prolific dev blog and there you have it. Changing the URL from www.classicgamesremade.com to www.olderbytes.com, therefore breaking previous feed links, probably didn’t help either.

My initial estimate for releasing Underworld Gold was March 2012. That was a while ago. I think all this deserves a little explanation.

Underworld Gold now has loads more content than its preceding version (v1.06). New NPCs, 150 new items, some of which stackable and charged and with a wide array of useability, five existing maps redrawn and three new ones, a couple dozen more monsters (needed to maintain balance with the new levels), some of which with brand new abilities, and others of which with two different abilities that contribute to making combat less than predictable. Content-wise I’m just a few short hours away from beta.

I’ll post a more exhaustive feature list in a later entry and you’ll find there’s quite a bit. There are also a couple I’m looking into but am not sure I’ll be able to provide yet (animated transitions for movement as an option being the toughest request I’ve had recently).

All the new content brought forth new challenges. In the game’s current state it triggers Window’s security, forcing the player to Run as Administrator. I have a good idea how to fix it but it isn’t a small task. Also the new content and higher resolution graphics have kept me struggling to optimize performance. I believe I’ve reached a satisfactory level now, but the game not being quite finished yet, I’ll reserve further comments at this point.

Naturally, all the fixes and additions have brought forth slews of bugs that have required lots of squashing.

Work on the sequel has taken great strides as well. The foremost reason I am doing this alongside finishing Underworld is that I prefer to keep the artists working. This is necessary to not risk losing them, which in turn could harm the quality and cohesiveness of the final game. At this stage I have all planned outdoor environments, including roads, forests, desert, mountains… New monsters (mostly outdoor mobs to populate the gestating world), several cutscenes, new stores and art for two new classes. About half of the GUI is done as well, which will allow me to post a video announcement shortly after releasing Underworld.

And of course real life. Things tend to get in the way like they always do but I do find time each day to at least inch closer to a final release.

Everyone knows a project is bound to face contingencies, setbacks, delays…

From the indie one-man studio (now with outside help) to the large construction company, something(s) are bound to get in the way of anyone’s objectives.

Underworld and sequel are currently affected by… Typhoons! Not one, but several have hit the people I’m working with in Manilla (Philippines), the worst of which is happening right now. So I’m glad I didn’t set a release date, but remain confident the remaining assets will be delivered as soon as can possibly be, given the circumstances. The most important being that they stay safe until good work conditions return.