While I am still tweaking Underworld a tiny bit to address final requests and fix a couple minor glitches, I think it is time to seriously start talking about the sequel.

The menace has past. Unbeknownst to the larger population, the cause of undead uprisings and vicious dragon attacks was sought out and vanquished by a band of six adventurers that vowed that they would not stay and await certain death as the world around them fell prey to rising pestilence and unchecked violence.

Citadels throughout the realm opened at last, to a world in ruin but transcended by the promise of life that was considered lost only moments before.

Families torn by loss and separation reunited as best as circumstances would allow. Toil started heartily after just days of mixed celebrations and mourning. Burnt villages and cities were rebuilt in weeks and trade routes reestablished with realms spared or less affected by the plague. Plague was the word adopted by many, to describe the inexplicable darkness that covered so much in ruin. Few attempted to understand it better, with more immediate priorities to attend to. But as these necessities subsided, questions arose.

The ancients spoke of a first coming. This had happened before and was likely to happen again. After years of peace disturbed by growing doubt and quiet rumors, subversity set in. The official response to the people’s demands for disclosure, as to the identity and whereabouts of the heroes that had once saved the realm, as to the nature of the evil they engaged and defeated, was continuously one of denial of any form of subsiding danger.

Then the dead started rising again. Albeit in small, easily manageable numbers, they were enough to turn subversity into rebellion. And rebellion was met with ruthless repression.

Baronies and Duchies seceded. While some renewed their oaths to the Crown, claims arose of the King’s madness and unfittedness to rule, followed by claims to the Crown itself. Others still crafted Royal Circlets of their own and war banners floated to the high winds. Winds that carried a renewed hint of the pestilence past, but few took notice.  The scent of blood spilt on fields of agony grew to such strengths as to make the subtle smell of ancient death next to unnoticeable. 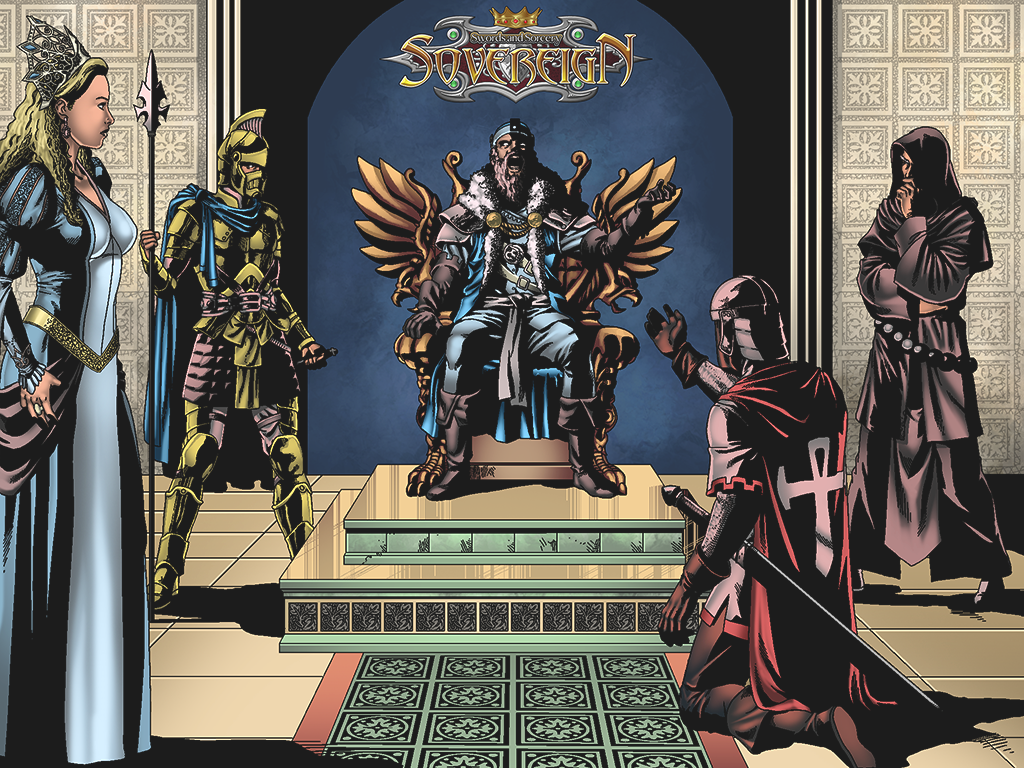 Swords and Sorcery – Sovereign will be a continuation of its predecessor , while expanding on its foundation in many ways.

Sovereign will take place in a large, open world that includes cities, villages, citadels, forests, mountain chains, glaciers, swamps, desert, caverns and dungeons… Your party of adventurers will deal with friends and foes as they had previously, but also with factions, political forces and alliances they can weigh into, or try to break. But they can also ignore them and choose to focus on other, perhaps more urgent preoccupations.

An extended set of spells and abilities.

Much more will be announced and discussed. Stay in touch for a first video introducing the GUI and some of the game’s future environments. You can join the monthly newsletter on the top right of the page.

Join the community forums to discuss development and take part in shaping the game. Note however that while many things will be open for discussion, some will not.

You can support development by purchasing Swords and Sorcery – Underworld and enjoy a solid 30 hours of dungeonning and adventuring!

5 thoughts on “Swords and Sorcery: Sequel to Underworld Announcement”