It’s been almost three weeks now since release and I’ve had tons of great conversations with many of you on how to improve the sequel. Once again I couldn’t resist the urge to implement some of these things to make Underworld better. While some things will indeed have to wait for the next Swords and Sorcery installment, a good deal of these are now in Underworld.

First and foremost, several of the game’s mechanics dwelled too hard on the old-school factor with little real benefit to the gameplay. These primarily include inventory and ressource management (trading, stores, food, water, gold). These are the most visible updates for v2.0.4: 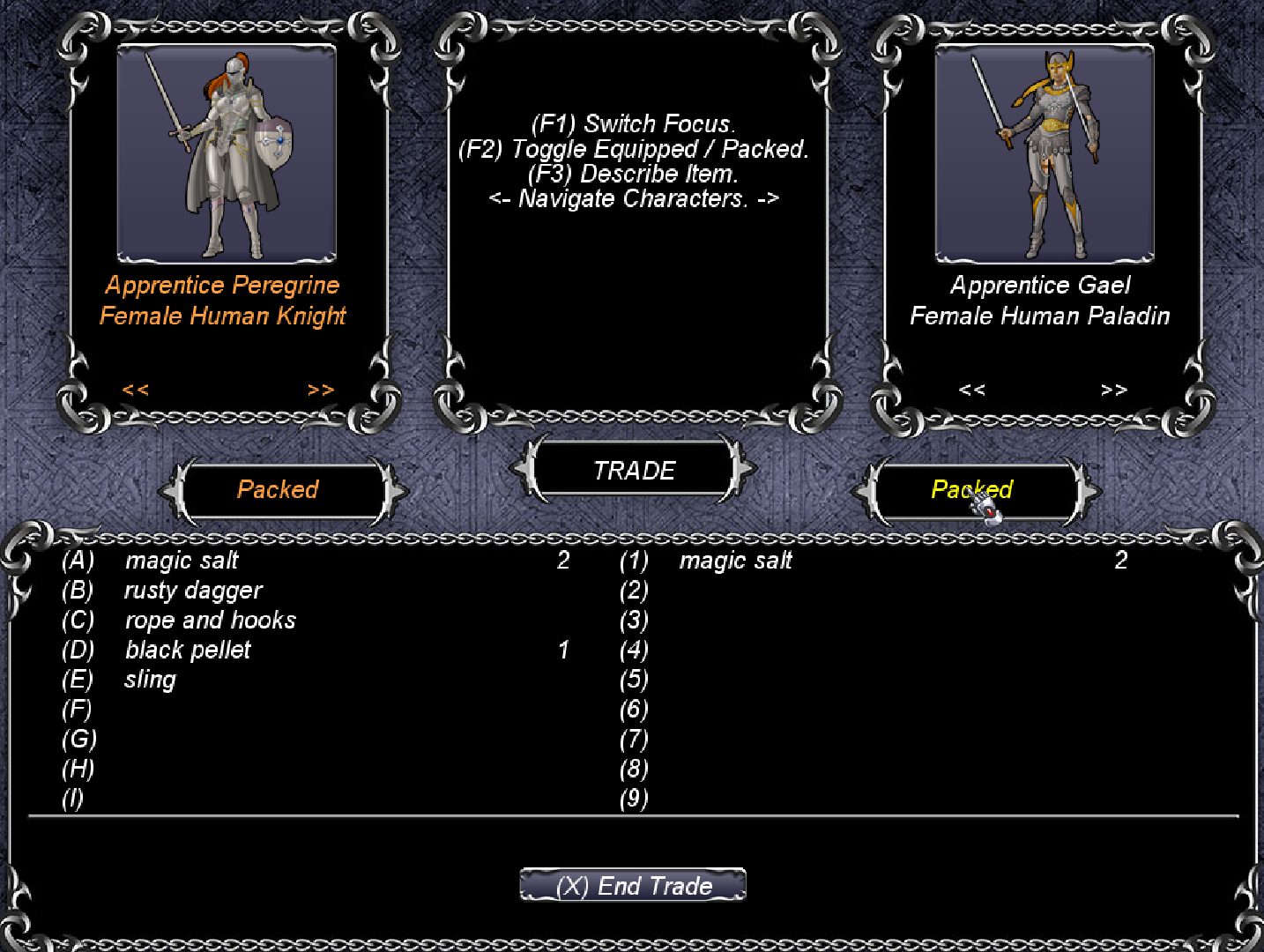 Trading between characters:  Two characters are represented in trade. F1 swaps focus from one character to the other. F2 toggles the part of the focused character’s inventory that is represented from packed to equipped and vice-versa. Arrow keys switch characters on the focused side (Trade can be used to equip or unequip if the same character is on both sides). A-I and 1-9 instantly transfers the given item from one side to the next. The usual constraints for equipping items apply. F3 switches to description mode and any item selected while in that mode triggers a popup with a description, as it still does in each character’s individual status screens. Using the mouse makes focusing unnecessary

Gold, food and water are now party ressources. The figures are global. (G)athering and (S)haring have been removed from the game entirely. 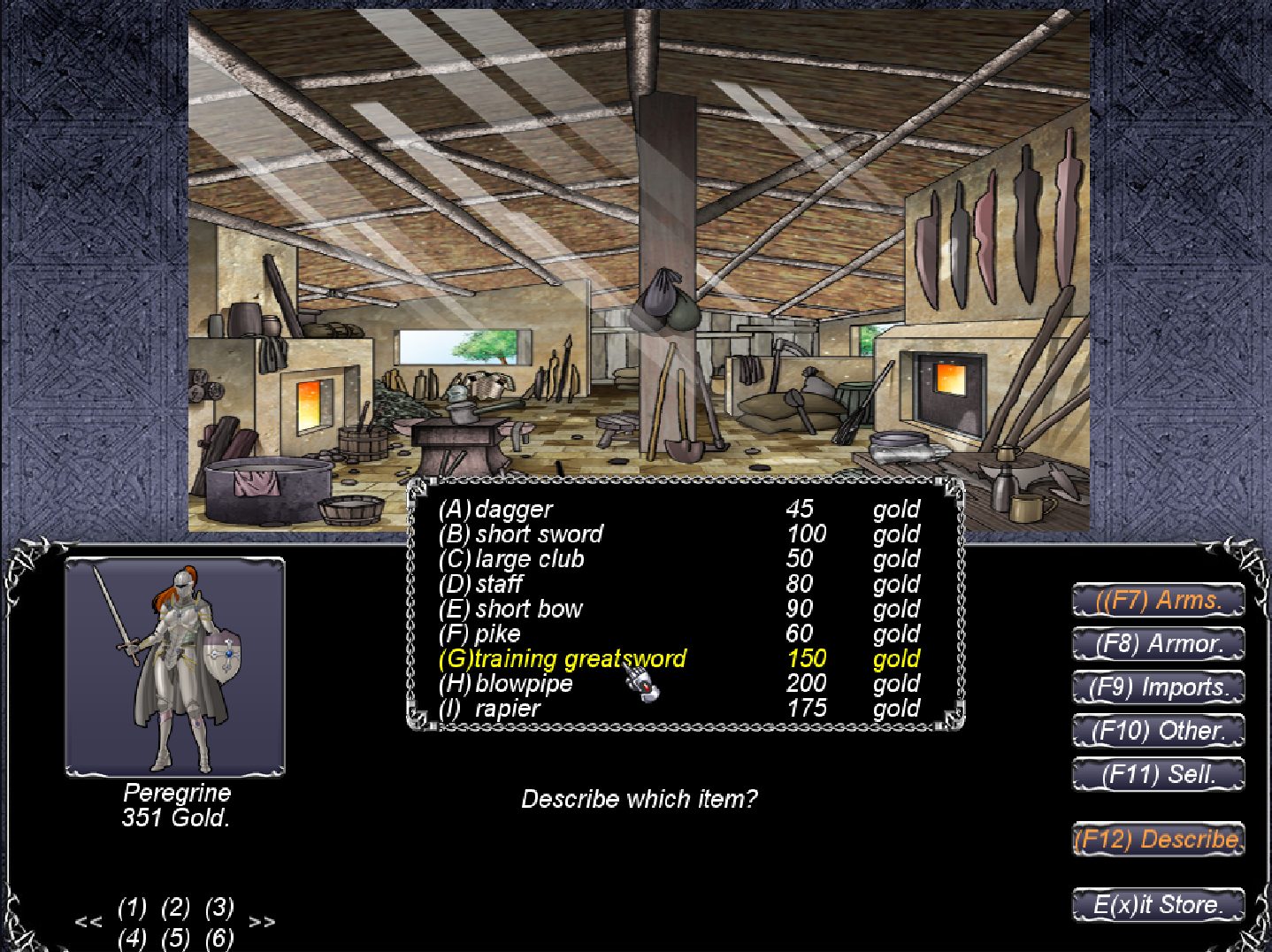 Stores have been overhauled as well. Characters and store “aisles” can now be changed without stepping out. Buying weapons (now “Arms”), armor, imported and miscellaneous items can be accessed via function keys (F6-F10) while F11 switches to selling mode. F12 switches to description mode, no matter what part of the store you are in. Arrow keys and 1-6 switch characters while staying in the same mode.

– Popup info screens explaining when Ste(a)lth is disabled and why (Rogues need full HP) and other less than evident restrictions.

– Added clues for some of the game’s more cryptic situations.

– Options accessible from the intro screen.

– Skill descriptions accessible in character status screens while in combat.

– An important item drop not occuring in certain circumstances.

– Fixed “A”ttack Necromancer causing the Rogue to enter ste(a)lth if first up.

– Fixed World Map (Now hotkeyed ‘W’) that made the goblin realm selectable when it shouldn’t have been.

– Fixed menu hotzones for mouse (that were too low).

My initial plan was to release a bug fix update but the other changes caused a considerable delay in its release. My apologies and thanks to all of those who have been patiently waiting for it.

Big, big thanks to players that have reported bugs and suggestions in the forums! Please check your emails for the update link. If for some reason you didn’t get it, don’t hesitate to ask for it at charles at this-website-url (olderbytes) dot com.

Next up, the sequel announcement. Just a few days now!